All the Charm of an Antique Dresser, Minus the Spiderwebs! 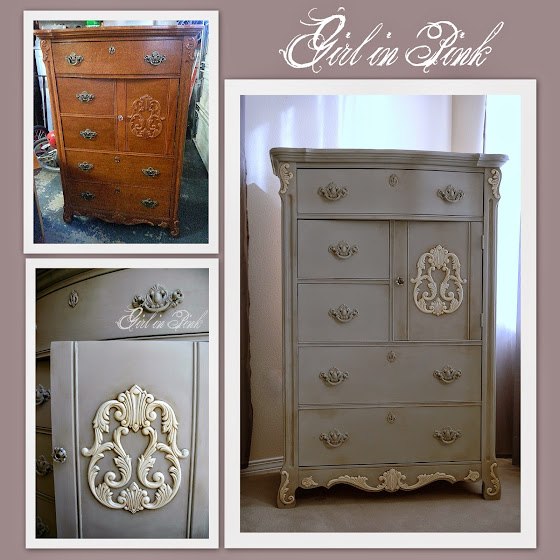 Pictures can be deceiving.  The photo that drew me to this majestic dresser posted on Craigslist was somewhat dark and grainy.  After making a quick call to the seller, I was on my way to look at what I thought was an old oak dresser.  Yes, I should have asked more questions before I got too excited but was worried that taking the time to ask questions would give another buyer a chance to say, "sold!  I'll be there in 10 minutes!"  It happens, a lot!  Used furniture sales are very competitive these days!

So, I was a little disappointed when I arrived to discover that the dresser I had driven across town to see was a reproduction.  However, the drawers were dove-tailed and the piece was solid and clean.  A pretty dresser with great bones and drawers that opened and closed without needing any TLC!  So what if it wasn't old, I decided it was a perfect candidate for paint.  What a treat to not have to do any repairs, vacuum away cobwebs or scrape finger nail polish out of drawers!  I just hauled this big heavy dresser home, did a quick wipe down and got to work! 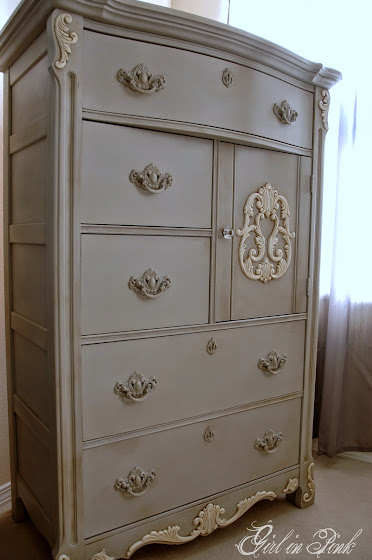 The color is a custom mix of 1 part French Linen to 1 part Old White. 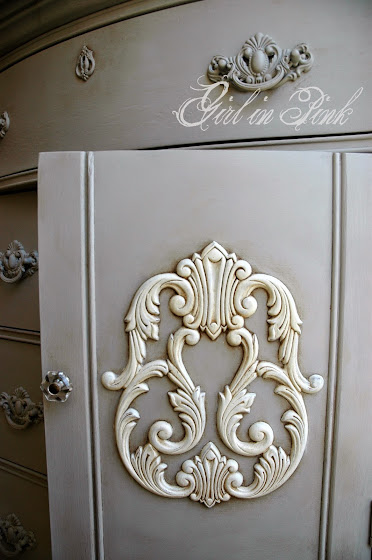 I painted out the wood carved accents in Old White.  After a coat of Clear Wax, I used Annie Sloan's Dark Wax to further age and bring out the details in the carvings.

I removed the hardware and painted it in the custom soft grey mix and then waxed it just as I had the entire piece.  I considered painting the hardware in Old White like the carvings but decided that it would be overkill.  Sometimes less is more, as they say. 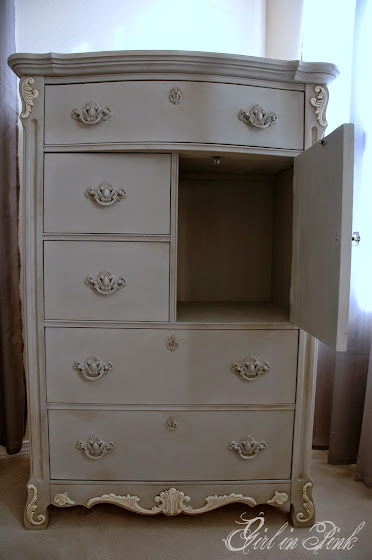 I have a confession to make.  I absolutely despise waxing the insides of cupboards and drawers.  I am not a contortionist.  So, even when I've chosen to seal a piece of furniture with wax, I find Artisan Enhancements Clear Topcoat Sealer to be ideal for sealing any paint finish on the interior of the piece.  Just brush it on, let it dry for 24 hours and apply a second quick coat.  No more standing on my head to buff out wax on the top of a cupboard's interior! 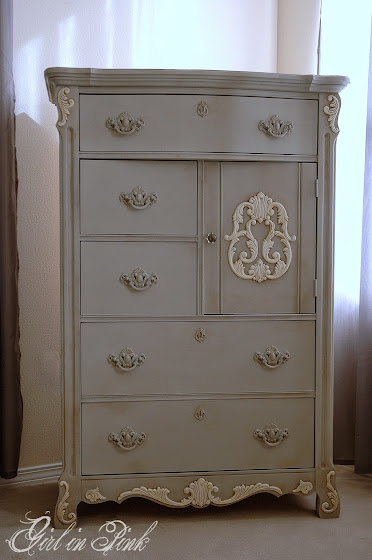 I am really loving how this piece transformed.  It may not be antique but I think it now has just as much charm and character as any 100 year old piece pulled out of a decrepit farm house, minus the mold, mildew and spiderwebs!

Thank you for your sweet visit today!

Sharing With:
Home Sweet Home at The Charm of Home
Feathered Nest Friday at French Country Home
Show and Tell Friday at My Romantic Home
Treasure Hunt Thursday at From My Front Porch To Yours
Friday's Unfolded at Nancherrow
Furniture Feature Friday at Miss Mustard Seed
What's it Wednesday at Ivy and Elephants 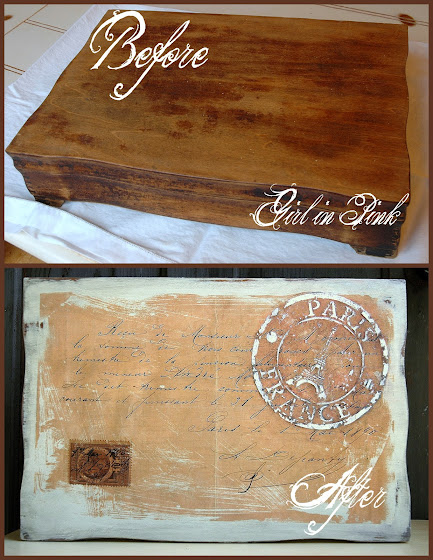 Old wooden silverware boxes make great canvases for playing with artistic finishes. They can
generally be found at estate sales or thrift stores and once completed, you have a one-of-a-kind work of art that doubles as useful storage!

Consider layering several techniques to create a finish with plenty of depth and interest. Do
you love an Old World look with French flair? Let’s walk through the layers of art finishes
used to create the weathered French Postcard look on this old wooden silverware box. 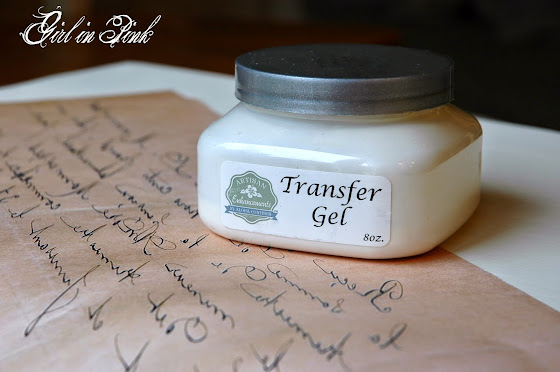 This box was first painted with 2 coats of Old White. The script used for the background can
be found here . The image was emailed to an office supply store with the request
that it be printed in reverse, on a laser jet printer with specific dimensions to fit the lid of the
silverware box. With the white border cut away, the image was ready to be applied to the
painted box. For a more rustic effect, the Transfer Gel was brushed onto the lid of the box
with a crisscross motion as opposed to a smooth application. The image was then applied,
face down onto the wet gel and any wrinkles or bubbles were gently smoothed away. 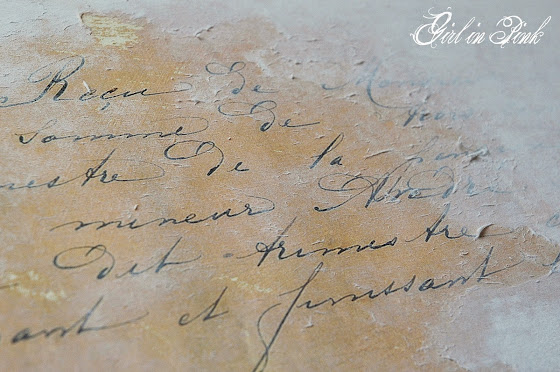 After having dried overnight. It was time to remove the paper fibers and reveal the transferred
image. The paper was dampened with a kitchen sponge and rubbed away, not being too
careful to preserve every bit of the transferred image, as the rough spots only added to the
rustic finish. In fact, heavier rubbing around the edges of the piece helped eliminate the clean
edges and enhance the old world appearance of the French letter. 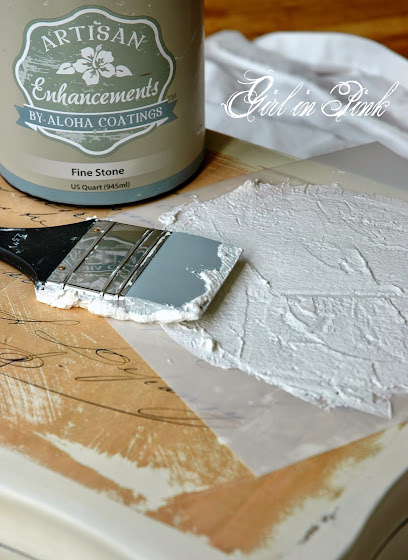 With the background in place, it was time to add dimension to the piece with a raised stencil
and Artisan Enhancements Fine Stone. Fine Stone is a plaster product with aggregate
texture and has no odor or harmful chemicals so it’s safe create with indoors along with all of
Artisan Enhancements art finishes and sealers. The Paris France stencil, also from Artisan
Enhancements was set in place and the fine stone was troweled over-top using the color
shaping tool. As soon as the stencil was covered, it was lifted straight up from the surface to
reveal the raised image on the box lid. The excess Fine Stone was scraped off the stencil
with the color shaper and returned to the container for future use. 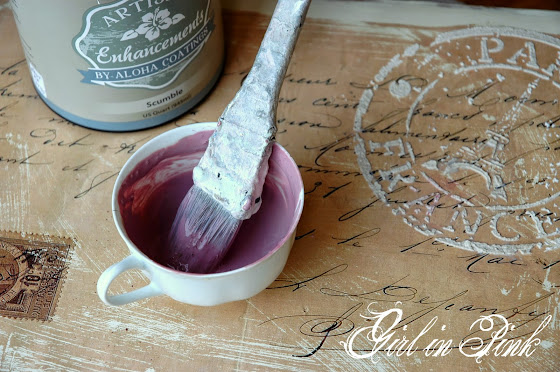 Once the Fine Stone had completely dried, Scumble, a tintable glaze-like medium was mixed 5:1 first with Coco and Burgundy and applied just to the raised stencil relief. After being brushed on generously, the glaze was carefully wiped away with a damp sea sponge. 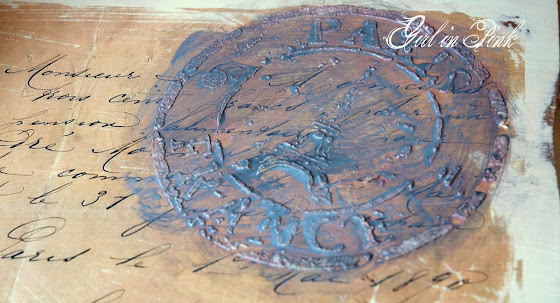 A second tinted Scumble glaze was then applied with a mix of 5 parts Scumble to 1 part
Graphite. This glaze was also applied to the entire box and then wiped away for a subtle aging effect. 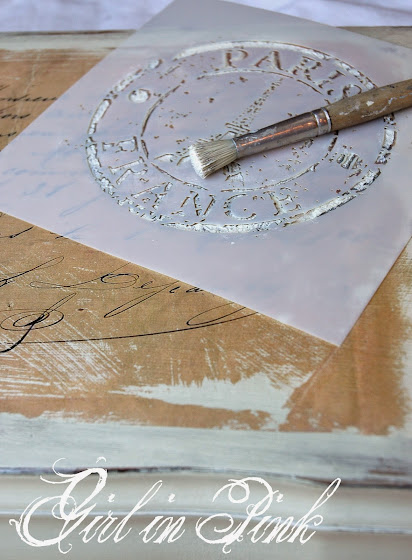 Once the Scumble had dried, the stencil was laid back down over the relief and Old White was stippled on with a stencil brush to further highlight the design. 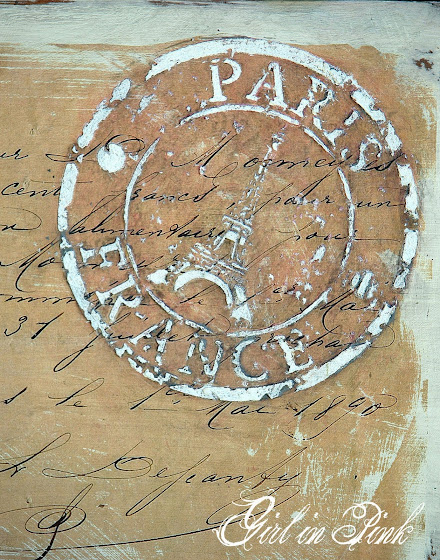 The result was a weathered, raised Paris, France passport stamp with just the right amount of
shadowing created with layers of tinted Scumble glaze, highlighted with Old White. 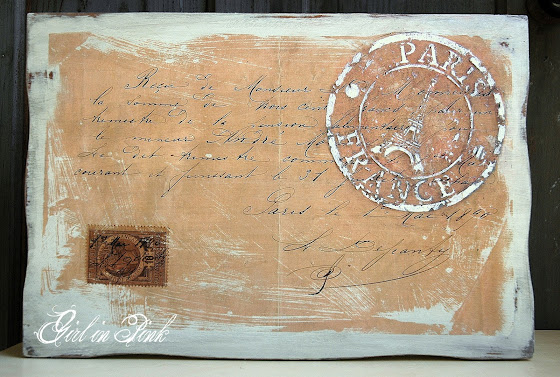 The Fine Stone Stencil Relief added a special artistic touch to the aged French letter and
dimensional quality that looks complicated but was actually very easy to do! 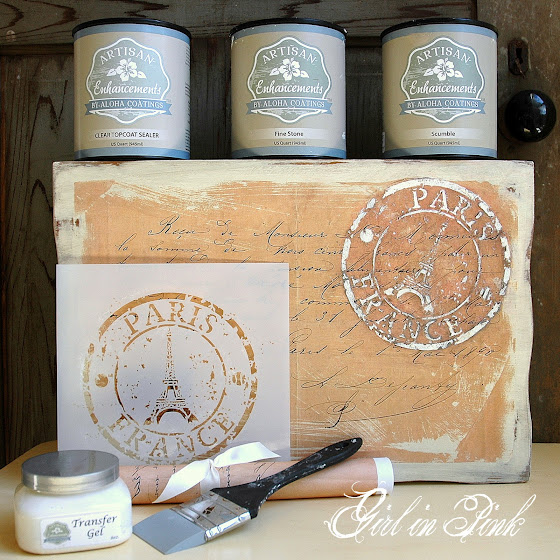 A thin layer of Clear Topcoat Sealer by Artisan Enhancements was brushed over the completed art finish. Twenty four hours later a second coat was applied for optimum protection. Clear Topcoat Sealer is an eco-friendly, high quality sealer that dries to a protective, clear matte finish.

What was once a discarded, boring brown box is now a beautiful piece of art to hold special letters and photos or maybe to sit on the coffee table for storing remote controls. Take this idea and run with it! The possibilities are endless with Artisan Enhancements and with eco-friendly products, you can create a masterpiece in the comfort of your home without exposing yourself, your family or the environment to harmful chemicals!

Disclosure: This is an Artisan Enhancements sponsored post, however the opinions and ideas expressed here are mine and I will only ever promote products that I enjoy using and feel may benefit my readers.

Thank you so much for your sweet visit!

Sharing With:
Home Sweet Home at The Charm of Home
Feathered Nest Friday at French Country Home
Show and Tell Friday at My Romantic Home
Treasure Hunt Thursday at From My Front Porch To Yours
Friday's Unfolded at Nancherrow
What's it Wednesday at Ivy and Elephants

Thanks for stopping by my little corner of the blogosphere! 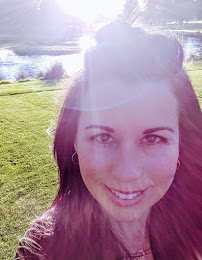 I hope you find some creative inspiration while you're here!
onegirlinpink@gmail.com

Made Pretty With Chalk Paint® 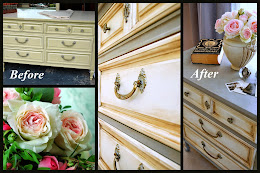 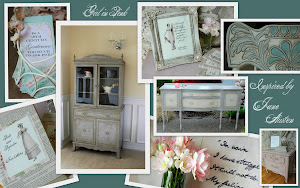 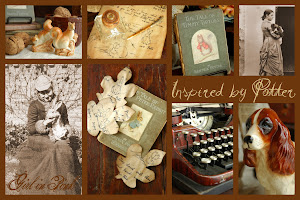 How to Create a Photo Collage 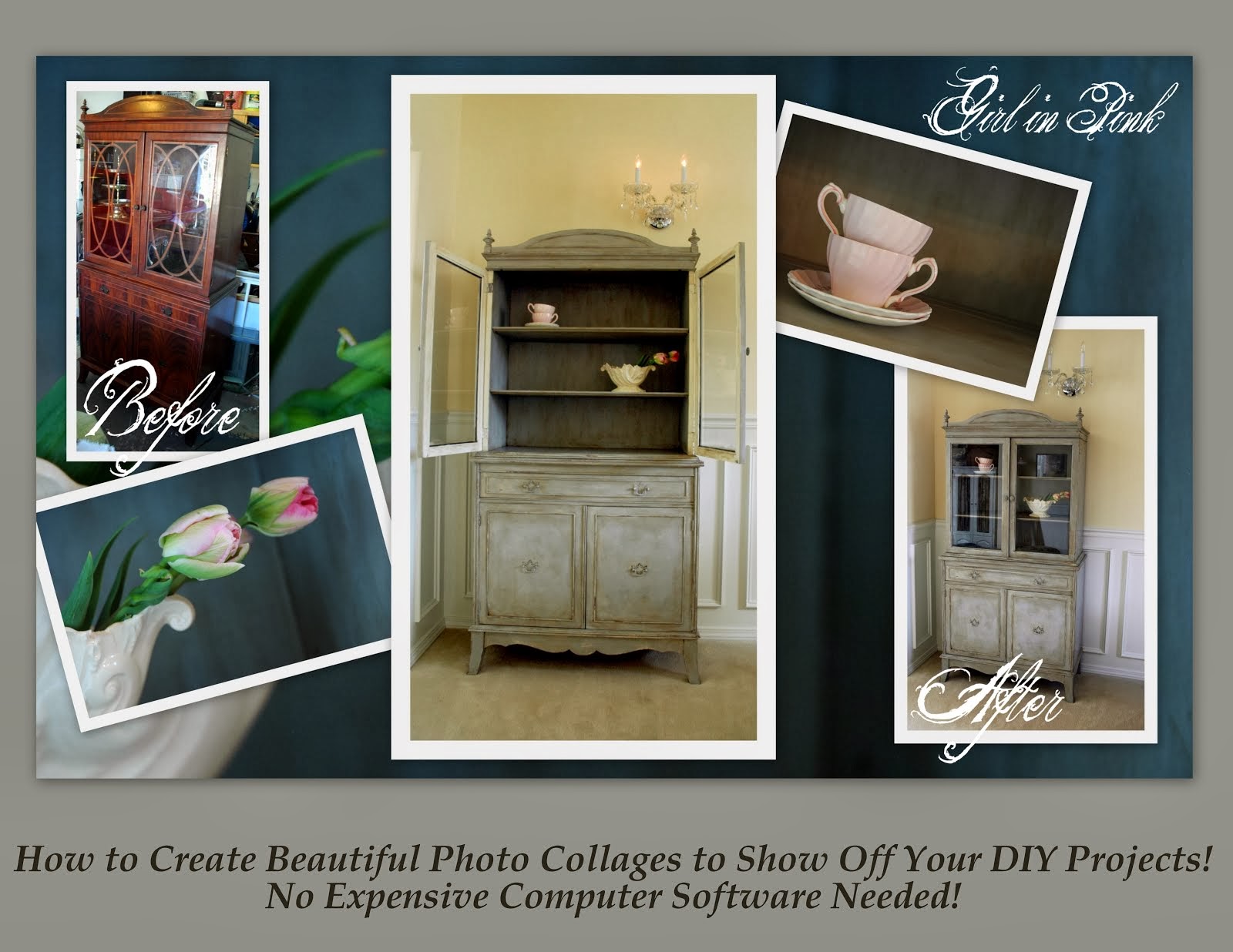 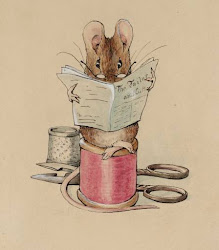